Hillary Rodham Clinton has been busy rounding up Democratic endorsements, but her chief rival, Senator Bernie Sanders, can now boast a powerful supporter of his own: James Bond.

The former “Fashion Police” co-host dishes on her fashion philosophy, which includes going against the trends.

As if they need persuading, Belvedere vodka is launching a James Bond-theme ad campaign to get New Yorkers to drink more martinis. The tie-in with the latest Bond film, “Spectre,”…

The most important Giants defensive player did not practice Thursday, but he is hoping and expecting to play Sunday against the Cowboys. “That’s the plan,” middle linebacker Jon Beason said….

Alberta is on track to have the worst air quality in Canada if immediate action isn’t taken to address pollution from coal-fired power plants, oil and gas facilities and vehicles, says the province’s environment minister.

Shannon Phillips said Wednesday she has directed her ministry to come up with a plan by month’s end to address the causes of air pollution after a new national air quality testing program found serious issues in central Alberta and slightly less serious concerns with four of five other regions.

Phillips said she wants to see better results in the annual testing next year.

“What I expect is that we will continue to see improvement on this until Alberta is no longer on track to have the worst air quality in Canada,” she told reporters at the legislature.

The testing, under the direction of the Canadian Council of Ministers of the Environment, found the Red Deer region exceeded Canadian ambient air quality standards for fine particulate matter and ozone.

“We are concerned by these Canadian ambient air quality results,” Phillips said following a technical briefing for the media. “The time to act is long overdue.”

She said failing to act will cost every Albertan more, regardless of where they live.

“These costs show up in our emergency rooms and in our workplaces in the form of lost productivity,” she said. “The previous government resisted meaningful action on air pollution and climate change and today’s results speak to that inaction.”

Phillips said the testing for levels of fine particulate matter was conducted because it has a large impact on human health, but stressed there are no immediate health risks to people in central Alberta.

She said her government will begin implementing action plans immediately that will include reviewing technology that could be used to reduce harmful emissions from industrial emitters, as well as using the licence renewal process to ensure industrial emitters are meeting new, stricter national standards.

The 10-year operating licences of many coal-fired power plants are currently up for renewal, ministry officials said.

“Looking ahead we’re exploring a number of further measures to reduce air pollution, including emissions standards for vehicles,” the minister said. “That work will be incorporated into the ongoing efforts of our climate change advisory panel, which will provide advice to our government this fall.”

The Pembina Institute said Wednesday that the best action the province could take to address the problem would be to expedite the retirement of coal-fired power plants in Alberta.

Measures that tackle carbon pollution would also contribute to cleaner air, so long as they address the biggest contributors to deteriorating air quality in Alberta

The Canadian Association of Physicians for the Environment said it was dismayed, but not surprised, by the findings.

“This calls into question the pervasive belief that the clear blue skies of Alberta foster clean air, safe from the pollutants better known from smoggier climes,” said Dr. Joe Vipond.

“We know that (fine particulate matter) has negative effects on the cardiovascular and respiratory systems of people and that exposure increases premature deaths, hospital admissions, and chronic diseases.”

Wildrose critic Leela Aheer was skeptical of both the findings and the timing of the report.

The MLA for Chestermere-Rocky View said Phillips’ claim that Alberta will have the worst air quality in the country within five years sounded “far-fetched.”

“There’s a very little amount of information to make such an unbelievably strong opinion,” Aheer said. “I think personally they are ramping up for the upcoming (climate change) summit in Paris.”

A large part of what it means to be a physician is to be the harbinger of bad news. 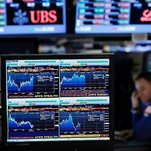 The data terminals, which have generated billions for Bloomberg L.P., are in the cross hairs of new rivals, while Wall Street is looking to shave costs.

Does “Watchman” change how you’ll teach “Mockingbird”? Here are six ideas for teaching “Mockingbird” today, as well as many resources for connecting Harper Lee and her work to the world around us.

“Hello everyone, and welcome to New York Fashion Week,” Erykah Badu said last night, taking the stage around 1 AM at The Top of The Standard last night as the rain drops began pattering against the glass windows. The cult favorite crooner arrived in true diva form. While her band members awaited her arrival, swilling champagne with the rest of us, the guest of honor arrived nearly two hours later than her scheduled performance time. Luckily, this left the crowd buzzing for more of her greatest hits.